Are you suffering from chronic fatigue, both mentally and physically? Are you experiencing hair loss or weight gain? You may have heard that these are all symptoms of hypothyroidism and may have even been to your medical doctor to have your thyroid assessed. But what do you do when you are told that your labs are normal even though you have all the symptoms of low thyroid function? What is the next step when you have been diagnosed with hypothyroidism and have been put on medication but you’re still not feeling your best?

You are not alone in feeling like your hormones are imbalanced but are told that everything looks great. The good news is, if you dig a little deeper, your intuition could be proven correct as hypothyroidism is vastly underdiagnosed. In fact, it is estimated that about half of people with hypothyroidism aren’t even aware that they have it! Even when a thyroid disorder is diagnosed, many people don’t feel right even after starting on medication.

What is the Thyroid Gland?

The thyroid gland is a butterfly shaped gland that is found at the base of your neck. This gland is responsible for regulating the metabolism of every cell in your body via the production of two hormones, triiodothyronine (T3) and thyroxine (T4). 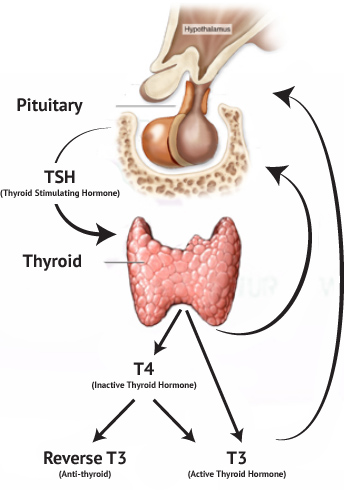 Thyroid Stimulating Hormone (TSH) is a hormone that is secreted from the pituitary gland in the brain. It’s function is to tell the thyroid gland to secrete its hormones, T3 and T4. If the levels of these hormones drop or the gland stops responding adequately, TSH levels will rise as the body attempts to raise the hormone levels by stimulating the thyroid gland more aggressively. This is why in most cases, hypothyroidism is characterized by high levels of TSH.

Thyroxine (T4) is the most abundant hormone that is produced by the thyroid gland. T4 is made from the amino acid tyrosine combined with 4 atoms of iodine. This hormone is only weakly active in the body and needs to be converted into a more active hormone called triiodothyronine (T3) via an enzyme called a deiodinase.

The majority of T4 is converted into the hormone T3 in various organs of the body such as the liver, skeletal muscle and kidney. T3 is considered to be the active thyroid hormone and is needed in sufficient amounts for the body to carry out its processes. Having low levels of T3 will result in symptoms of hypothyroidism.

Reverse T3, an inactive form of T3, is naturally made in small amounts by the body from T4. However, when the body needs to conserve energy such as in times of illness, famine, or chronic bodily stress, the body will start converting more and more of the available T4 into reverse T3. Not only does this cause our T3 levels to fall, but the reverse T3 blocks thyroid hormone receptors and prevents our thyroid hormones from carrying out their job.

An underfunctioning thyroid gland is referred to as primary hypothyroidism. This condition is especially prevalent in women, particularly in the months after childbirth or during the menopausal transition. It is thought to affect as much as 10% of women, many of whom do not even realize that they have it!

As the thyroid gland is the metabolic centre for our entire body, it is no surprise that the symptoms of hypothyroidism are diverse and can affect you from head to toe. The most common symptoms that I see in my practice are fatigue (both mentally and physically), unexplained weight gain or resistant weight loss, dry, brittle hair, increased sensitivity to cold or feeling generally cold, and constipation. However, low thyroid hormone can also result in symptoms of depression or low mood, anxiety, dry skin, trouble concentrating, and impaired memory or “brain fog”. Further, pain or stiffness in your muscles or joints, muscle weakness and generalized swelling are also symptoms of hypothyroidism.

Hypothyroidism also greatly affects the female reproductive system. Symptoms ranging from irregular periods to very heavy flow can sometimes be attributed to poor thyroid function. Similarly, if you’ve been experienced repeated miscarriages or infertility, you may want to have your thyroid checked!

The most common cause of hypothyroidism in Canada is due to an autoimmune condition called Hashimoto’s Thyroidiits. In this condition, either thyroperoxidase antibodies (TPOAb) or thyroglobulin antibodies (TgAb) will damage the thyroid gland resulting in impaired production of thyroid hormones. For those that have been diagnosed with Hashimoto’s thyroiditis, my approach involves lowering antibodies as much as possible through dietary, nutritional and medication interventions.

An iatrogenic illness is one that has been caused by a medical examination or treatment. If you have had hyperthyroidism (e.g. Grave’s disease) or have had thyroid cancer, you may have had a partial or total thyroidectomy (removal) or may have had a radioactive iodine treatment to destroy part of the gland. Most individuals end up with hypothyroidism after these treatments due to insufficient thyroid tissue remaining.

The thyroid gland needs various minerals and nutrients in order to produce thyroid hormones. If you are deficient in any of these building blocks, you may experience symptoms of hypothyroidism as the production of hormones slow down.

As mentioned previously, your body needs to convert thyroxine (T4) into the more active triiodothyronine (T3) in various tissues of the body using an enzyme called a deiodinase. In some people, this enzyme doesn’t function properly which results in having normal serum levels of TSH and T4 but deficient levels of T3. For many people with improper conversion, regular thyroid medications may not be sufficient to ease all symptoms and a more comprehensive treatment plan may need to be employed to address the various causes of poor conversion.

Thyroid hormone resistance is similar to insulin resistance in diabetics. In this condition, the body’s cells are not as responsive to thyroid hormones. Usually this presents as normal levels of T3 and T4 but elevations in  TSH levels.

Secondary and tertiary hypothyroidism are rare causes of hypothyroidism and are caused by disorders within the pituitary gland or hypothalamus in the brain, respectively. There are usually other concerning symptoms than just those associated with hypothyroidism in these cases.

My approach to investigating thyroid function is to look at the thyroid system as a whole. What this means is that not only do I check TSH levels, but I also look into the levels of free T4, free T3 and thyroid antibodies. Occasionally I will also investigate reverse T3 levels if I believe there is a risk of elevation of this hormone.

After I gather a full picture of how the thyroid gland is functioning, a personalized treatment plan is created. Treatments may include correcting nutritional deficiencies, lowering antibody levels, replacement of deficient hormones, and correcting other hormone imbalances in the body that may interfere with proper thyroid function.

Have a question you want answered? Ask Dr. Hartman